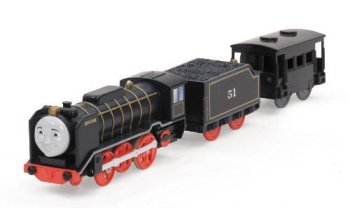 Hiro is wise, very dignified and enormously kind. He's friendly and is able to find good in any engine he meets. He does not appear to hold a grudge; in his first appearance, he helped Spencer after an accident, despite Spencer previously trying to send Hiro to the smelter's yard.

Hiro once lived on a faraway island. He was the strongest engine on his railway, and was famously known as "Master of the Railway". He was eventually brought to Sodor where he worked for many years. However, he began to show his age, and the works didn't have the necessary parts to repair him. To avoid scrap, he was put on a siding, where he had to wait for the parts to come from his homeland.

Thomas eventually found him and, fearing Hiro would be scrapped if he wasn't Really Useful, promised to bring him back to his former glory while keeping him a secret from Sir Topham Hatt. Thomas also had many of his friends help in the restoration, and Hiro quickly gained their friendship. After breaking down again while trying to avoid Spencer, Hiro was hidden away in another siding, where passing engines visited him and kept him company.

When Sir Topham Hatt found out about the situation, Hiro was brought to the Sodor Steamworks, where Victor oversaw his restoration. Once Hiro was restored, he helped Spencer after his accident, and worked with him and Thomas to finish the Duke And Duchess's summer house. Despite everything, Hiro had grown homesick, so Sir Topham Hatt arranged for him to be sent back to his homeland.

Hiro eventually came back to Sodor to help the engines with the summer holiday traffic. Upon arrival back to Sodor, Hiro went to the Steamworks to be examined and then went to Knapford station for his welcome party, which was almost delayed as Thomas was trying to find a welcome present for Hiro instead of telling the other engines about the party. But, Hiro told Thomas that having his friends at the party was the best welcome present. During his visit, Hiro told Thomas to take the load of bees through the woods, which Thomas ignored. However, Thomas took Hiro's advice after taking Hiro's flower truck to get the bees back to their hives. Later on, Hiro saw the Fat Controller, and assumed he was too busy to give orders to his engines. So, he tried to help the Fat Controller by ordering his engines - but he only suceeded in becoming "Master of the Muddle". However, he made up for his mistakes by telling the engines to go to Knapford and await orders from the Fat Controller.

Hiro is still on loan to the Fat Controller, as he saw Jobi wood being delivered to the Docks and told Thomas about where it came from. He later pushed Henry to the Steamworks to have his side-rods repaired.