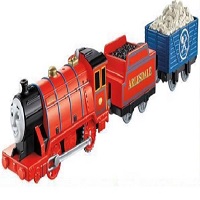 Mike worked on an unnamed line in England until 1967, at which time their line closed down and he, Rex and Bert, were sent to Sodor to work the Arlesdale Railway. Not long after arrival, Mike mocked Duck when the Great Western Engine had trouble with his whistle making unusual noises, which lead to Rex telling Mike to lose his whistle. While pulling a passenger train, a stray cow had wandered onto the line and Mike whistled so loudly to make it move that his whistle flew off. This meant that his crew and passengers had to whistle for him. To make matters worse, there were no spare whistles for Mike so he was sent to the quarries for the rest of the day.

Years later, a few months after Jock came into service, Mike decided to pay the new engine back for all his cockiness. So, whilst double-heading a passenger train, Mike reduced steam after the Green, causing Jock to pull him and the passenger train alone. However, Mike's plan backfired when his injector failed on the return journey and Jock had to take him home. After being mended, Mike apologised to Jock