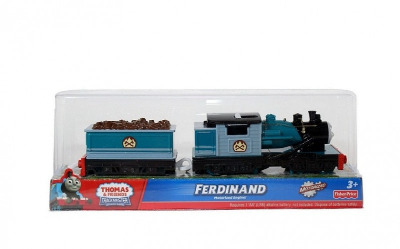 A new Search and Rescue Centre is being built on the Island of Sodor as a base of operations for Harold, Rocky, and a new lifeboat named Captain. Special super strong, deep red Jobi Wood, from Hiro's homeland, is being used to make the Centre. All the engines are very excited and all want to help deliver the Jobi wood to the Rescue Centre. Diesel, determined to prove his superiority over the steam engines, decides to take the Jobi wood to the Rescue Centre himself and races down the tracks with the Jobi wood. Thomas sees that Diesel is going too fast and chases after him. The chase results in an exciting rescue as Thomas saves Diesel from falling over the edge of the unfinished bridge but the Jobi wood crashes into the sea below - now there is no wood to build the Rescue Centre.

As a reward for his daring rescue Thomas is given the job of collecting new wood from the mainland. He is then told there is no room on the steam boat, but Thomas asks to be carried on a raft behind the boat. Thomas waves goodbye to his friends at Brendam Docks and heads across the sea to the mainland. That night the raft carrying Thomas becomes separated from its tugboat and Thomas ends up alone and stranded on the mysterious Misty Island - a wild and wonderful island with a multitude of secret hide outs, rickety tracks, and bridges. Thomas discovers that the island has its own railway, and meets the three engines, known as the "Logging Locos", who run it - Ferdinand, and two small twin engines named Bash and Dash, who were sent to the island after causing trouble on the mainland. Thomas also finds that Misty Island has plentiful supplies of the rare Jobi wood! With the help of his new friends, Thomas attempts to find his way back to Sodor and uncovers more of Misty Island's mysteries - including a tunnel that connects the two islands! Meanwhile, out at sea, Harold and Captain carry out a search party to look for Thomas.

Thomas decides to go through the tunnel back to Sodor, but he and the Logging Locos get trapped after the tunnel falls in. Thomas then tries the smoke signals Salty told him about. After being spotted by Percy, the Fat Controller, James, Edward, and Gordon sail to Misty Island in hopes of finding Thomas while Percy and Whiff go through the tunnel. They eventually come to the blockade, break through to Thomas, and they all puff back to Sodor. Thomas sails back to the island again to find the Fat Controller and the engines.

After the Logging Locos are given the Sodor treatment at the Steamworks, they help to build the Rescue Centre. They finish it in time and it is soon opened.

As the engines are laughing with their new friends at the Search and Rescue Centre, Diesel 10 rolls up on the mountain ledge, sniggers, and glares down at the engines remarking that they will laugh on the other side on their boilers soon.