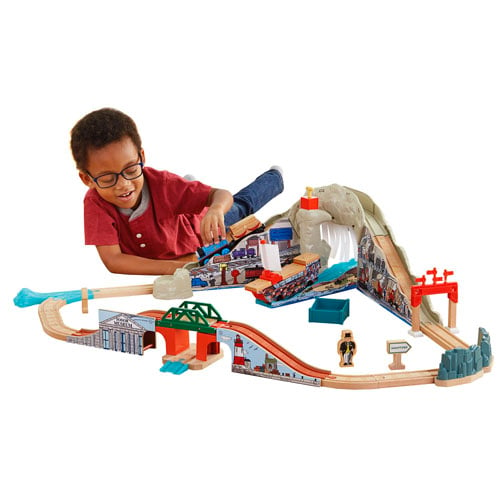 A Wooden Railway playset that brings the excitement of the Sodor’s Legend of the Lost Treasure DVD to life! Multiple play features include drop-down tracks, a hidden pirate ship reveal, a drawbridge and more.

Inspired by the DVD, Sodor’s Legend of the Lost Treasure, Thomas is about to embark on his most thrilling adventure yet! While transporting TNT to the demolition crew working on the new branch line, the ground gets shaky beneath Thomas’ wheels. Press down on the TNT plunger and WHOOSH! Suddenly the tracks drop down and Thomas disappears into the crevasse! As Thomas falls, a hidden ship rolls out from within the cavern. Its mast unfurls to reveal it’s a pirate ship! The missing treasure can’t be far behind. Can Thomas locate the treasure and deliver it to the museum on time? He’ll have to make sure he stays on track so he doesn’t fly off the rails into Arlesburg Harbor! There’s also a drawbridge to let the ship out to sea, and the free wheeling ship can also be played with separately. Includes Thomas, cargo car, treasure cargo, free wheeling pirate ship vehicle, multiple track pieces, rock that hides the treasure, pirate ship launch ramp, bridge turn, museum, cargo bin, two large hill pieces with mechanism, two small hill pieces with draw bridge and the pirate ship launching bay.